Budapest: the next day

Despite taking "NO Jet Lag" Homeopathy every 2 hours of our flight, we still had jet lag. When Chris touched my shoulder to wake us to join the others on a bus tour of the city I was more than grouchy,
"Why are you touching me?"
So we slept ... and slept....and slept. Sixteen hours later we thought it best to get out of our nest and join the living, lest we miss the city completely.
There was a park just around the corner from our hostel. 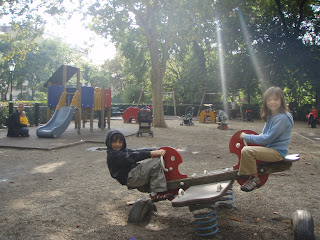 We marveled at being half way around the world, the similarities, the differences, not being able to understand a word anyone said or anything written. We relaxed into our justifiable culture shock.
Chris loved this:
notice the metal cone at the base of the water fountain (yellow topped do-hickey on the left)----it would stop the erosion that normally occurs where the water drips. 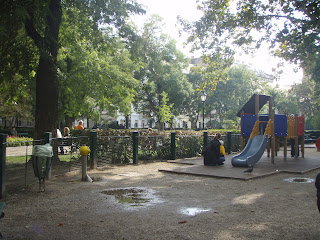 We were on the Pest half of the city and Chris had planned a walking route down Andrassy St. to see a castle. We were all excited to see a "real" castle. The name of the castle is either Mezogazdasagi or Vajdahunyad vara, my memory and the map are unclear! On the way there we saw this bike and thought of our Uncle Gabe: 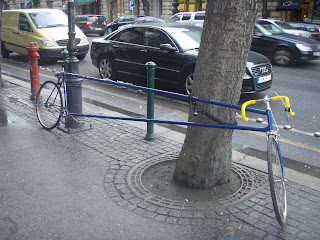 Andrassy St. is the shopping district--um....yeah, not so much for the small town Cabatics. We are not Guchi, Luis Vitton, or Armani people. It struck me as similar to any big city- like New York, City. 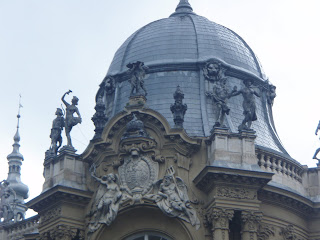 It was pouring rain and yet the architecture seemed suited to the dreary day. 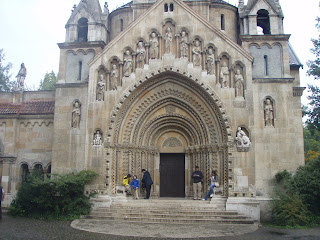 We liked this ornate doorway and rode the lions, drank Fanta, and rested. 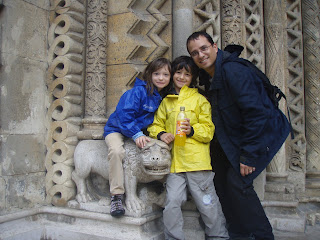 We played tourist and took pictures of any and every little thing. 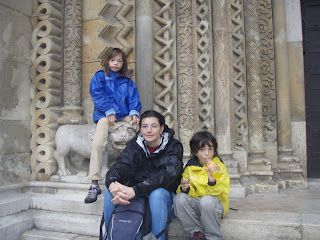 Pretty flowers, in the background the castle door: 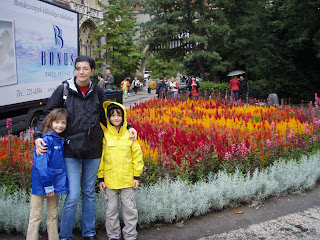 This building sat across the moat. It looks as if they flood it and when temperatures freeze, have a skating rink. 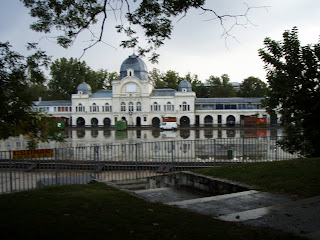 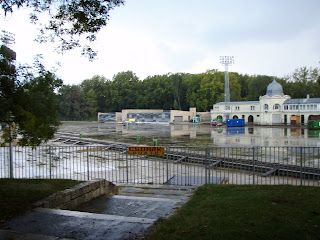 From the other side of the moat we looked back at the castle and threw our snacks to some ducks. 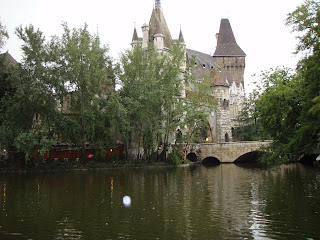 I tried to save some of our snacks but the ducks in Hungary were hungry and who wants to eat old cheese and crackers when there are delicious pastry shops at every corner? 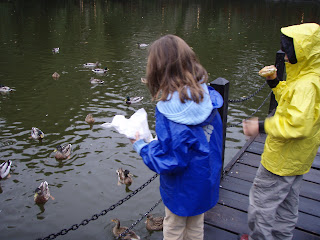 The cars were cool and small, old Mitsubishi vans, Mercedes, and Audi's but this "American" monstrosity stuck out as odd and funny: 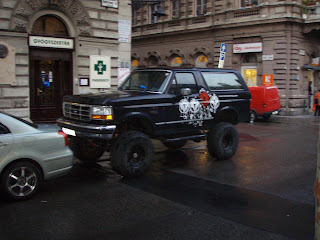 The Danube (or Duna) was beautiful at night. Across the river the lights of Buda twinkled and reflected on the water. (Hannah was here!) 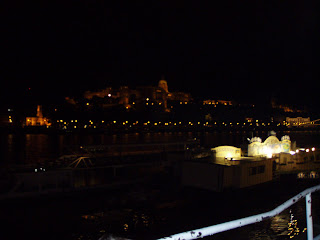 Liesl and the kids became very close through the trip and here Liesl shared a story of the history of Budapest that she learned earlier during her tour of the city. It was a horrible story of a "bad guy" being rolled down one of the majestic hills of Buda in a barrel full of nails. ouch. 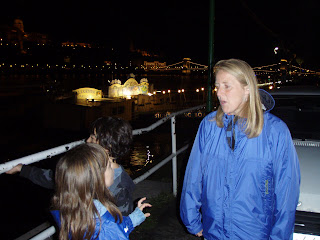 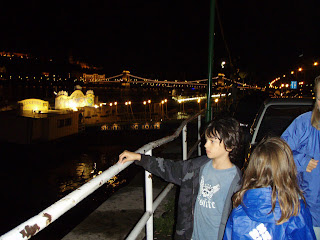 After walking all over the city we were hungry. And there is nothing more fun than being hungry, having hungry kids and blisters and not speaking the local language. Finally we found what appeared to be a pizza place near the Danube. Ordering was always comical as we tried desperately to convey through sign language and charades that we wanted food with NO CHEESE or DAIRY of any kind for our lactose intolerant boy! Lactose intolerance, we discovered, is not a common condition in these parts. 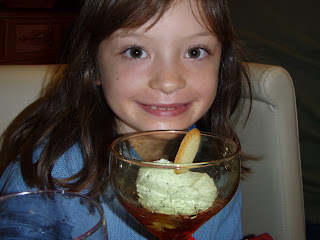 XuMei got mint chocolate gelato after her teeny tiny pizza. Xander got a tart made from "Forest fruits" after his facsimile of a "burger". 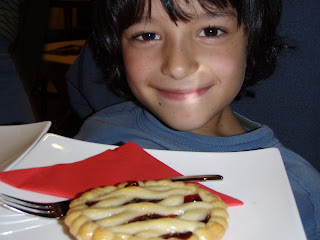 At the end of our day my sweet bug lover XuMei found this creature on a concrete building. OK, I know it's a cockroach, but I still think it's cool that the budding entomologist found it in the middle of a concrete jungle. 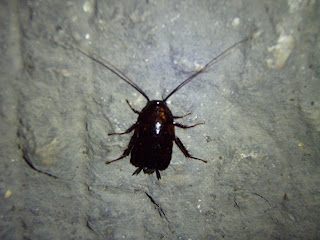 It was a fitting end to our first day in ANOTHER COUNTRY!!!!
Posted by Renee Cabatic at 11:20 AM

How would someone ride that bike? Jon wonders if it was an art installation rather than someone's actual bicycle.