The night before we left Budapest the Hostel was hopping. The kids slept through it luckily, but Chris and I spent much of the night wondering if we should go see what all the ruckus was about. We could hear some of the other band members in the "lobby" . The Lobby of the hostel was open to the sky and on some evenings turned into a pub. When it rained they threw a tarp over the tv and let the rain wash the smoke and dust away. If the hand written sign said "Beer tonight"...well, there was beer tonight!
The next day we heard some of what happened. Apparently some British fellow was so drunk he didn't seem to notice or care that he had sliced his arm on broken glass. Theresa and Logan attempted to help him in spite of his drunken buddies harassing him.
After that evening we needed to get out of the hostel so we walked to the park at the corner. We ate delicious pastries for breakfast. Oh the pastries! Everything from cheese, fruit, chocolate and even bacon. Slices of bacon sticking out of a croissant. Delicious.
We learned to say "thank you" in Hungarian. "Cosonom"--pronounced "Koh-see-numb". We said it often and people would smile at our attempts to communicate. 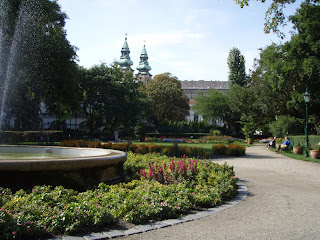 We played again at the park near the hostel. 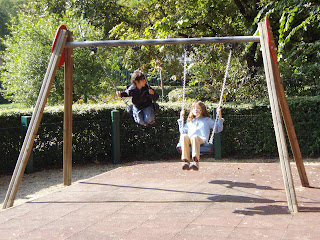 After we played and got some energy out we had to cram ourselves, our luggage and the enourmous instruments into 2 vans. 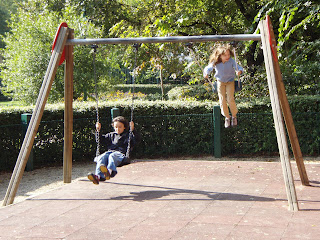 The van driver, who spoke English, was told to transport 13 people, their luggage and "a few small instruments". Sorry Igor! 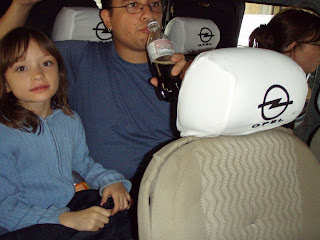 Xander and XuMei sat on laps and we played ESP , Safari, our version of 20 questions---(which we call a million questions) and then sat tense and waiting at the border crossing. The trucks sat in long lines to cross the border. Easily 5-10 miles of waiting trucks on either side of the border crossing. A Ukrainian women named Zita, who is part of the Sister Cities Program, met us there and helped to explain what the instruments were and why we were bringing these enormous black tubes and wooden crates into their country. Zita arranged that we could go on to our hotel but the instruments would have to come back to customs for further "processing". It took about an hour, not long really, but oh so hideously long to 7 yr old's stuck for hours already in a tight van. Thankfully Zita gave the kids some snacks. Introducing us to the weird and wonderful flavors in Ukrainian packaged foods. Onion crackers and pudding filled mini croissants --yummy. And only the tip of the iceberg of what was to come. 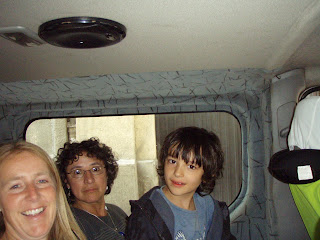 As we drove through the country side we were struck by how much it looked exactly like Corvallis but with blacker soil. Liesl and Jolene said it looked just like Iowa (where they are from) The outskirts of the city were speckled with red tile roofed, single story houses. Each had little gardens with chickens, goats and occasionally a cow crossing the street. Beautiful and varied metal trellises hung heavy with grapes, green, red and black. Then we started to see apartment buildings, square, concrete and gray (soviet era?) some as much as 10 stories high. The balconies had plants and flowers, potted gardens and clothes hung out to dry. Then cobblestone streets.
We had been expecting a city about the same size as Corvallis but Uzhorod was much bigger. About 3 times the population and with a more big city feel. 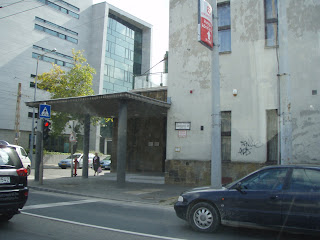 We arrived in the evening at the Hotel Atlant. This lobby became our unofficial gathering place, where we all met to go to meals, tours, gigs and other activities. The receptionist gave us our keys and answered our excited questions but she never smiled. 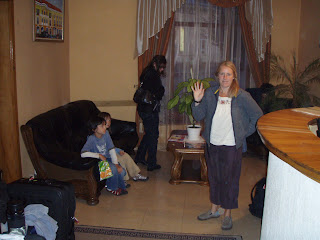 Our luggage in the lobby. The instruments had to go back to customs as they still were not quite cleared. These were moments when we wondered if we would get to play music at all. 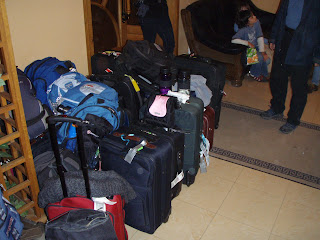 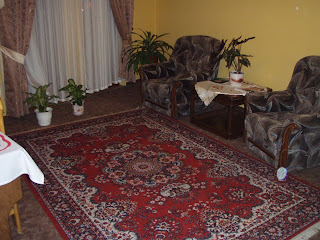 One room had a big bed and the other this couch. Chris and Xander, who can figure out anything, couldn't figure out how this couch turned into a bed. The next day, housekeeping had turned it into a bed for us.....:) Not that it mattered-- we mostly all slept together, using the couch as overflow for whoever got tired of sleeping like kittens. 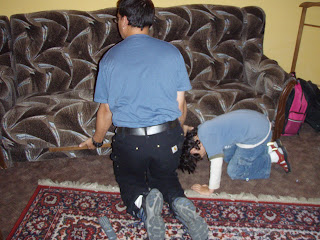 One view out of our Hotel window. The buildings were old but covered with neon signs in Cyrillic. I had to ask or investigate to figure out what the stores were inside. Many of them were banks, shopping centers (for clothes especially) and casinos. The streets were cobblestone and the pothole you can see in the picture below was repaired slowly without power tools. 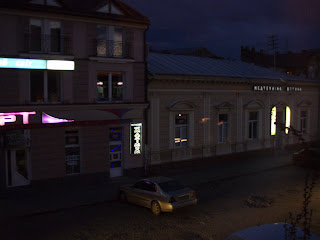 Yay --we love exchanging money. Here in Ukraine it was hrvnya. Pronounced "hu riv nee ya", roll the "r" like in Spanish "Gracias". 5 to 1, which initially made us feel very rich but we soon found that most consumer goods were priced to make up the difference. Food was inexpensive, though. So a pair of jeans might be $50 in the U.S. was 250 hrvnya in Ukraine, a mocha would be $4 U.S. but only 5 hrvnya. But to be fair the size of the mocha was not like one in the U.S. I like this though, since we had no way to reheat leftovers anyway, small serving sizes suited us. 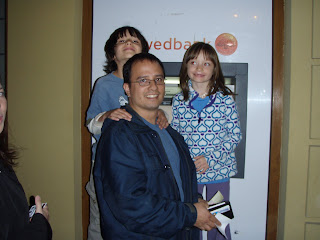 We met a wonderful young woman named Vita who had just returned from a year in Philomath! She suggested an American themed restaurant called Kactus. The theme was Wild West. The door handles were guns and the walls were covered in Native American art. We got a nonsmoking room, thankfully, because the air was thick with smoke. The band was jazzed to finally be in Uzhorod, hungry, and bored with waiting for the food so they lined up the water glasses and started tapping them with knives to play a tune. Sara started it but it turned into a joint project with everyone adding a bit of their talent to the mix. Chris and Xander made the crystal glasses sing by running there wet finger around the edge. Even if the marimbas had never made it in to the country these folks would have figured out a way to make music. 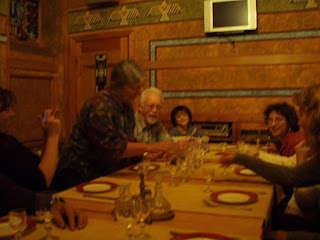 The menus were entertaining everywhere we went. For more of this sort of thing check out Engrish. It has more from Japan, but a few good ones from the old eastern block countries and one from Malev airlines (the Hungarian airlines we flew on between Amsterdam and Budapest) 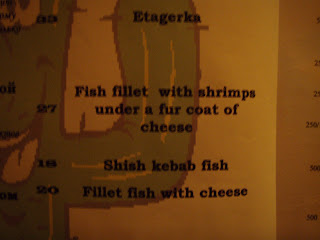 Fur Coat of cheese turned out to be a pile of sour cream and cottage cheese with shredded cheddar sprinkled on top. As far as Xander was concerned this ruined perfectly good fish and shrimps. 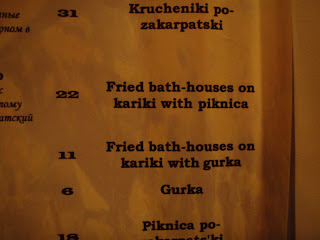 Oh, I so wanted to order the Fried Bath-houses with piknica! Vita was so busy translating everything I never did find out what this was. (If Vita or Lisa are reading this, please tell us in the comments section---I am still dying to find out!)
Oh, and while your at it could you tell me what this sign is saying? I saw it in the WC, or Water Closet. 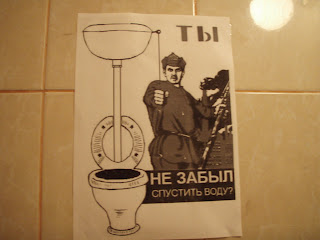 I think it says, "Did you remember to Flush the Toilet?"
Any other guesses? Place your bets in the comments section!
Lisa and Vita will set us right and who ever comes closest wins a tin of duck liver pate!!!!
Posted by Renee Cabatic at 1:21 PM

My vote for the toilet sign, read in the voice of Yakov Smirnov...

In Soviet Russia, toilet flushes YOU!

Love the pics and the stories!
E

I am enjoying this so much! And bacon croissants -- I want one.

p.s. thinking of last friday... how are you doing? let me know if you need *anything*!

i know vita... she is a great dancer! her friend liza stayed with my friend jenny... are y'all back in town or what, we haven't seen you around... but we've been busy. let's do playtime or something!
s

There is a nice video on youtube of the glass concert in the restaurant. I had to see what the Maharimba band was like. Very cool. What a fantastic looking trip!