We all tried to sleep as much as we could that first night even though our bodies told us it was the middle of the day. I counted the minutes until morning and I was happy to discover the hotel Atlant had a generous continental breakfast:
juice (random fruit-pineapple, papaya, orange)
coffee or tea
apple, cheese, or sausage stuffed crepes
eggs: fried (sunny-side up and not cooked through--ew!) or soft boiled
hot dogs (just laying, all lonely and bunless, on a plate with a bag of mustard on the side)
slices of ham (from a can) & cheese
cucumbers & tomatoes
coleslaw
butter (lots of butter)
bread (a whole loaf) 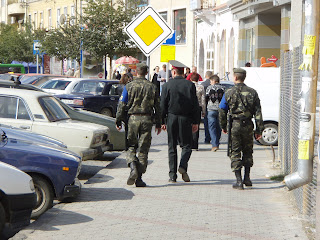 The tour guide book said, "Don't try to take pictures of the security guards/police/military." So I waited to snap this shot of them from behind. There was a bank on every block and one of these fellows in front of it. They also patrolled the city and told the farmers (usually older women) who had dropped a sheet on the sidewalk and put out their wears to "pack it in".
Even though we saw plenty of police/security types there seemed to be a general disregard for the law. A kind of "Wild, Wild, West" mentality.
I noticed teenagers drinking beers openly on the boardwalk and said, "Oh, that's not legal in the U.S."
Our translator, Lisa, said, "It's not legal here either."
That first morning, we walked a couple blocks to the grocery store. It was small but well stocked and swarming with people. The deli counter had a line about 10-15 people long. The prepared foods were delicious and many families used this as a method to reduce work in their home kitchens. It was described as Ukraine's version of fast food. When women work all day outside the home they don't go through a drive through for dinner, instead they bring home traditional fried cutlets, meatballs, fish, and vegetables from grocery store deli counters.
At one point a fish jumped out of someone's hands and flopped around on the floor--Xander was excited by how fresh the fish was.
The store had a bulk section in the frozen foods.
It had many choices of flavored whip creams:

I wanted a small amount of milk and could not find anything that looked like a milk carton. There was lots of dairy but I was not sure if it was kefer, yogurt, cream or some other dairy product. I checked my travel guide and found the word for milk: moloko. A kind man who spoke English helped me to see that the moloko had been right there all along. In bags. Bags of milk.
The lowest fat percentage was 2.5% (I am used to skim--XuMei loves cream so was thrilled) .
The cashiers were all seated. We had to pay extra for plastic bags, most people bring their own bags. As we left we noticed this playground across the street from the grocery store: 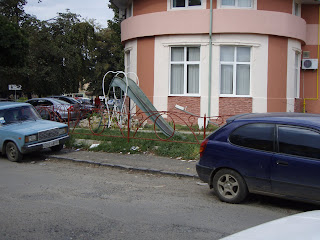 Walking home from the store: 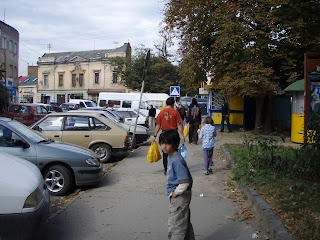 When we arrived at the hotel we were greeted by everyone frantically trying to put the marimbas together so that photos could be taken of them and delivered to the border crossing. They still weren't convinced these "instruments" should be let into their country. They stared putting them together in the hotel lobby but quickly realized that wasn't going to fit so we moved out into the street. We were quite a spectacle. 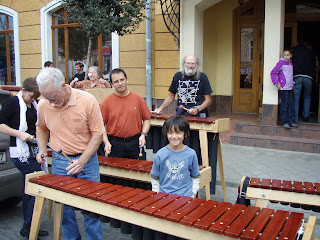 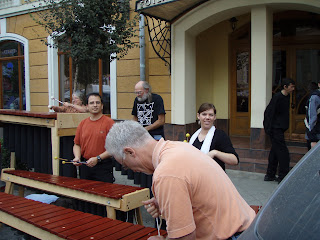 View from across the street: 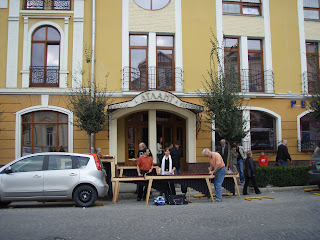 For those of us who are familiar with marimbas, this sight might not garner our attention, but for Ukrainians, who have never even seen marimbas, this scene stopped traffic. People pulled out their cell phones to take pictures, shook their heads, stopped and stared. 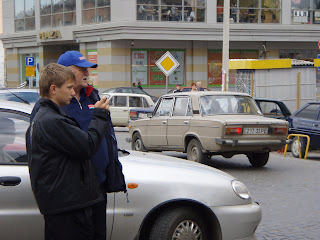 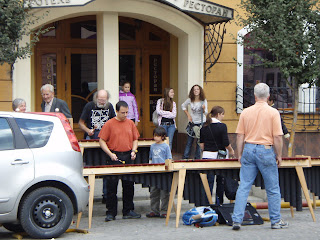 We packed up the marimbas and headed off to our first gig. It was in front of the equivalent of a city hall where weddings happen. We were met by some Roma children. Many Ukrainians call them Gypsies. This was a powerful and difficult moment for us, Xander and XuMei had never met a homeless person and had not realized that there could even exist homeless children. Everyday after this we packed up the extra bread and meat and cheese from breakfast and handed it to the first homeless people we saw. 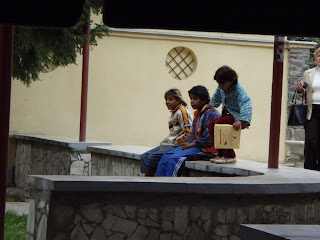 Our new friend, Kate. She is the granddaughter of Katherine, an English teacher at the Linguistic Gymnasium (a local high school): 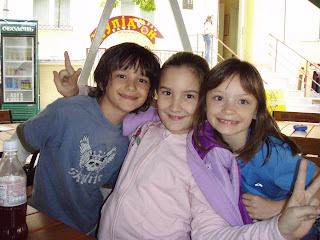 Kate is learning English. Katherine is wonderful and treated us like old friends, inviting us to lunch and a play date for the kids. I felt like I'd known her my whole life. 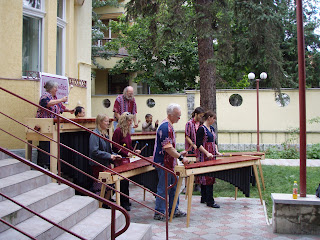 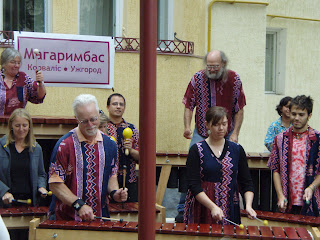 They played as we waited for the happy couple to emerge married. Apparently the violinist is the usual wedding day entertainment, so we kinda took his gig. He played along with the music anyway: 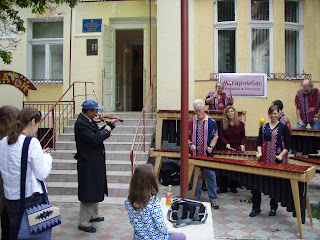 Kate, Xumei and Xander jumped and played as we waited. 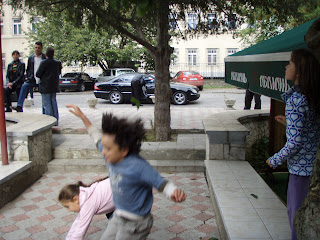 And then there they were! A more resplendent wedding I have never seen. The glitz and glamour was top notch. Hours and hours as well as thousands of dollars had been spent on hair and make-up alone. 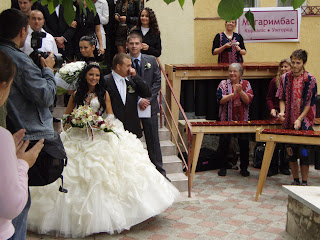 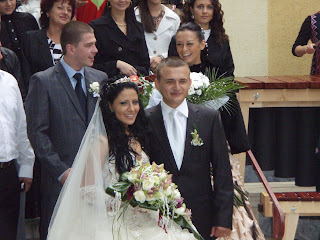 XuMei has always loved weddings. She asked for and received a wedding dress for her 3rd Christmas. She loved this wedding.

Everyone who attended dressed to the nines as well. 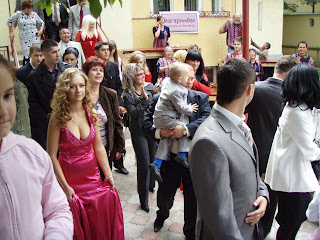 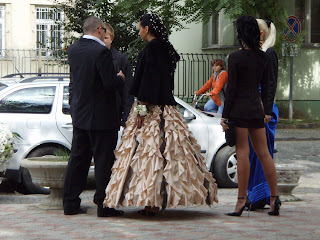 After the wedding, the kids, Steve (husband to band member Jolene), and I went to a nearby park to play. 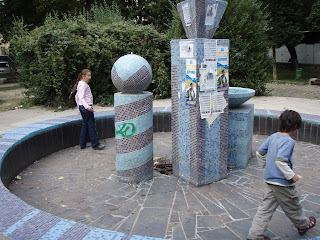 XuMei asked why there were empty bottles and other garbage at the park. We played "soccer"-football with a bottle cap and tried to decipher some political posters. 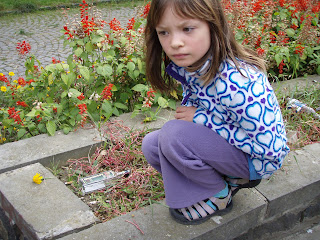 Then we walked the board walk that runs along the Uzh River. 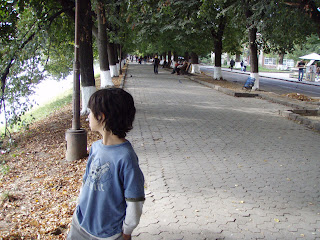 And we were invited to sit in on a master dance class. Somehow it had gotten out that Chris and I like to Salsa dance. We have been taking Cuban Salsa lessons for about a year with a group in Corvallis called Rumbanana. Ira (Vice director of the Rehabilitation Center and one of the organizers of gigs for the Maharimbas) asked us to give a short demo of our dancing! Yikes!
These dancers were athletes, and very professional. I felt a little silly dancing in front of them. But it was fun to show them a style of dance that is more "down and dirty" than the ballroom style Salsa they were familiar with. 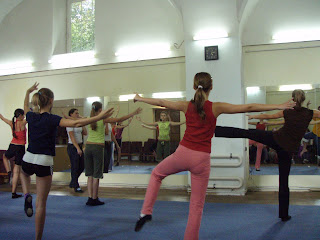 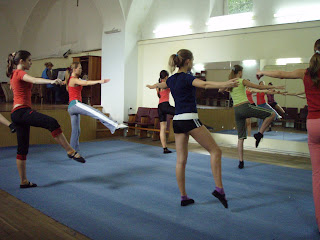 After we walked back to the hotel we found out that we were going to have dinner with a local family. In the photo below, Kate is telling me that this street is usually a bustling street market. The gray building on the right opens up and is loaded with merchandise. 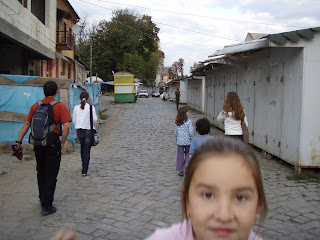 Then we had dinner at Magda's house. It was wonderful. Magda and her son Roma hosted. Roma is a music teacher and played guitar for us beautifully. He also showed us a music video of his band, 9 Caliber . The gist of the song called Mamma-Mia, was about how all people (rich, poor, Gypsy, Ukrainian) are one under God.
Then Magda sang a song for us, while Roma played. They stopped and bickered before finishing the song. Vita laughed. Vita then translated that the song was about a mother and grown son having a disagreement.
In Ukraine, hosting is very different then what I am used to. Especially since I am notoriously bad at hosting. I always mean well. I might remember to ask if a guest would like something to drink, but I rarely remember to actually get it. I am more the "feel-free-to-act-like-this-is-your-own-house" type host.
But in Ukraine, everywhere we went, we felt well hosted. Drinks were poured before our glass was empty, food was abundant and delicious, and conversation flowed, in spite of the language barrier. Magda's was no exception, and she shared with us my first taste of cognac. Uzhorod has a cognac factory that just happens to be where Magda works. So along with the conversation, the cognac flowed. There is a tradition in Ukraine that even numbers of flowers, toasts, drinks, etc. are reserved for funerals. Happy occasions must be celebrated with odd numbers. After my first shot, I had to have a second because it was delicious and one is not enough, but after my second, I had to have a third. After the third my judgment was gone, so I had a fourth and than tradition dictated I have a fifth. After that I really don't know.....:)
I do remember one thing: Magda's toast.
Her wish for all of us: Love.
Not like the sun, because it is to hot and can burn,
not like the moon because it is too cold,
rather like the sky.
Endless.
From left to right:
Vita (translator who just got back from a year in Philomath), Magda, her son Roma, Steve (husband to band member mentioned above), Jolene (band member), Chris, and in the front XuMei and Xander. 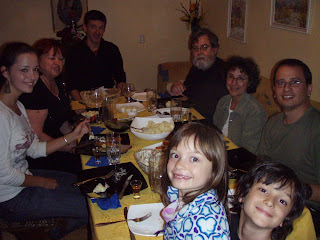 Magda must have cooked all day. Xander said the food was better than a restaurant. This is an enormous compliment from him. I couldn't stop eating (and didn't want to try). But I exclaimed that I was unable to leave any of the delicious food on the table! Magda told us a Ukranian folk story/joke/parable about a woman who goes to the doctor and asks for help because she eats everything her husband and children leave on their plates because she can't bare for anything to go to waste. The doctor suggests to the woman that she get a pig to help her. The woman gasps in horror and says, "Then I'll have to finish the pigs leftovers, too!!!"
Magda invited her twin granddaughters over to play. They brought their best friend.
Biatta, Kate and Renatta. (Sorry--it might be Renatta, Kate and Biatta!!:)

Even with very little English, the kids were playing in no time. At one point the girls insisted that Vita translate the directions for a game to Xander and XuMei even though Vita tried to tell them she was sure XuMei and Xander would know how to play Hide-and-Seek. 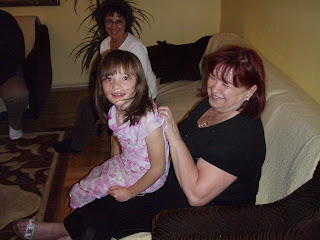 I can hardly believe this was only one day, and I am sure I left a bunch out. Even though we were busy all day we still went back to the hotel and struggled to fall and stay asleep for what was our usual daytime hours.
Posted by Renee Cabatic at 9:46 AM

Totally worth the wait!

The sentence can go either way, but for Pete's sake - no apostrophe in Maharimbas!

Love the pics and the stories,
Erin