If I'da known you were comin', I'da baked a CAKE! 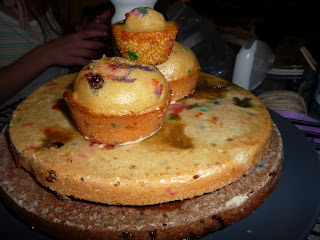 Xander and XuMei and their two friends made a cake. They did it without a recipe. They thought about what they know about food and cake and baking and they added ingredients. There was discussion and disagreement about what should go into the cake so some smaller cakes were made to allow for different combinations of ingredients. 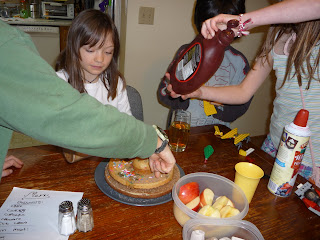 Where to put the toppings? And which tasty treats on what sections of the cake? 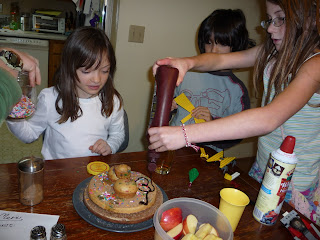 What should the frosting be? 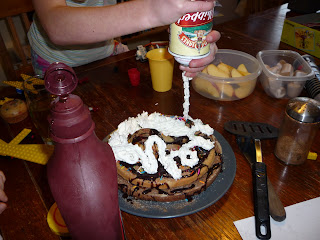 Xander took his cakes off the top to avoid the dairy.
Everything is better with sprinkles. 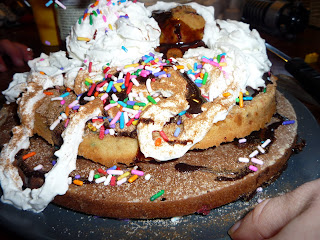 The cake was delicious, very sweet and filled with fun. Very little of it was actually eaten, though. The joy was in the making. 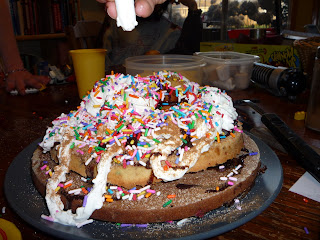 I was reminded of this cake baking day when I came across a page on Sandra Dodd's site called:
Cake as Sacrifice
fascinating stuff, cake....:)

Since this cake we have baked several other cakes. Lemon Cake, and Vegan Chocolate Cake most recently. The Vegan Cake was awesome and led to discussions about chemical reactions so now I am researching the best Chemistry set and finding more science experiments we can do at home. Xander is watching Robert Kampf --The Happy Scientist, BrainPop and various You-tube videos on chemistry and other science related topics.
XuMei is exploring commerce and economy. She made hundreds of bills and priced everything in our house. It is a store and a bank. She also created debit and credit cards. They have both become interested in very large numbers.
"Infinity is a concept Mom, not a number. What is the largest actual number."--Xander
So off I go to Google largest numbers and we are learning about googol, googolplex, Graham's number, large number notation, exponentiation, tetration.
All that and a little cake!
Posted by Renee Cabatic at 6:30 PM

Wow that cake looks really good for no recipe! I want some!!! I wish I could be there!
I love how Xumei is so serious about things when she is interested in them.
The twins turn 9 on the 16th, right? The 17th for me, haha.
love you
-Sara

That is so cool! You are such a good mom! That is the sort of thing I shrink in fear from. :p

hey chica,
eleanor and i made irish soda bread out of the book of days from blue yonder farm... it had a little experiment about baking soda and acid vs. yeast to try and it was very fun. the soda bread rocked--maybe especially because we put in cranberries instead of raisins in deference to mr. gus who doesn't like raisins. happy baking!