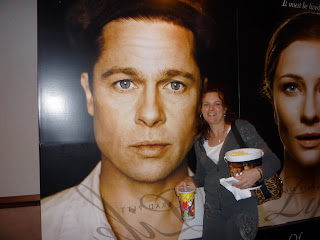 I have been seeing Twilight at the theater as a form of cheap enjoyable therapy. So I asked some of my friends to join me. Christine has long loved her imaginary boyfriend Brad Pitt and lo and behold there he was at the theater. A mission to acquire the enormous cardboard Pitt head was hatched. I would pull the van up to the side door and Christine would grab it and run down the hall, throw it in the van and we'd be off. Luckily, Christine asked the theater management if she could just lawfully have the Paper Pitt and they said , "YES!"
After the Twilight credits rolled a woman in the front stood up turned around and asked everyone how many times had we seen the movie?
I didn't answer. I hung my head in shame.
She was curious because she is the proud Mama to one of the more prominently featured extras. She pointed to him as he was leaving. Like any good crazy stalker fan I ran after him. When he came out of the restroom we exclaimed! He's the guy who sits behind Bella in Biology and whose locker is right next to hers. We asked if we could have a photo. I managed to bite my tongue and not ask what it was like to be that close to Robert Pattinson. Gah, I embarrass even myself.
Turns out his dad works with my friend Cassie's husband (or some such six-degrees-of-separation-small-town-small-world sort of thing). His name is Tyler Nordby.
To read more about Tyler click here.
To find out if you too could be an extra click here.

Christine, Me, Tyler Nordby and Cassie. 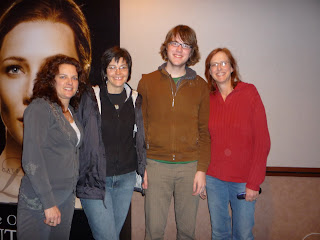 Posted by Renee Cabatic at 2:55 PM

I checked the phone, it's turned on. Just in case you want to, ya know, invite someone who *hasn't* seen the film, ahem.

This is so cool. Your very own Tim Booth moment, sort of. Your photo turned out way better though.

I miss you. Let's get together.

yep, me too diana! glad you're having fun renee, but i miss you too.

I love how small the world really is. What fun!

How funny! Tom & Norene (Tyler's) parents have taught Austin at Awana for the last 2 years. :) They told us all about Tyler's 'fame' at the 4th fireworks last year.